When  the change of baton from  Nnamdi  Okonkwo , former  CEO of   Fidelity Bank , to  ,Mrs Nneka Onyeali-Ikpe was announced ,it was a celebration galore . The reason behind this may not be far to seek . First , she is the first female CEO since the bank was  established . Two, her  professional pedigree in the banking  flaunted to the world particularly to   the bank’s  investors  is reassuring .

However ,  the excitement  appears to be short-lived .  After  the   financial year 2020  that  ended  with  uninspiring  results  , reservations  were raised against the high hope that heralded the announcement of her takeover . .  The bank’s   major  performance metrics in the full financial year 2020   results at  both the top and bottom lines  moved   sharply  southward.. From the  hopes  and glimpses of  better  returns on the horizon  in   the first three quarters  of that  financial year ,the  year  ended abruptly with   a downturn as its profit backtracked. The major spoiler was the N16B impairments registered  by the bank . But that  performance was a tip of a iceberg .   . Surprisingly ,however,  the first quarter of 2021,wholly supervised  by Nneka also ended in a deep loss of N9billion .  Fidelity’s Q1 ’21 results indicate  while its  PBT grew 54% y/y to  N10.1bn, the bank reported an after-tax loss of -NGN9.1bn because of a negative result of   N18.7bn in OCI.    The  negative result of -NGN18.7bn in other comprehensive income (OCI) was due to fair value adjustments made to bond securities following the rise in yields Indeed,   these  ugly trends   raised   serious concerns for some observers and stakeholders . It  was , indeed, a poor starting point for   Onyeali-Ikpe   .

The bank is blaming this havoc on the deleterious environment .  Without any doubt, the financial  sector was stormy and still remains so .The COVID-19 pandemic and its macroeconomic headwinds  put a lot of pressure on banking sector . Buffeted by the forces of macroeconomic and institutional headwinds induced by the pandemic only few players were in  firm control of their own destinies  ; the foundation of the past were shaken and fractured just as the industry terrain changed shape faster than some top management could refashion its basic beliefs and assumptions. Consequently , stagnant growth, declining margins and falling market share became the industry’ s competitive challenges. Fidelity Bank was also a victim .

But   is it enough to blame  the banks misfortune on the negative impacts of the deleterious environment? .Often  too  , executives have used supposed institutional disadvantages as an escape clause for poor competitive performance   .  Though arguably    Fidelity Bank is  a  leading player among tier 2 banks ,   the bank  has remained a threshold player for the fact that its past leaders decided to maintain a path of least resistance .For ambitious leader, this bank has enough potentials to climb to the  next level .in the industry . Some analysts are still optimistic that the bank could be turnaround .

There are two options before the leadership of this bank : One , with an ambitious   leadership  at both the executive and board levels  , its equity could be jerked up .  At a point in time .  speculations   from  some  analysts   were that Fidelity would transform to  a first tier bank  by    equity  upgrade  .But , the bank  has not been fortunate to get such an ambitious   leader  with fire in his belly  at the helm of affairs that could imagine such a future and transform the  bank   . The mantra was and  is to shift the blame on inclement institutional factors

But the fact remains that any  company that cannot imagine the future wont be around to enjoy it  . What occupies the senior managers attention  in the bank appears to be  restructuring    and  re engineering or core process redesign. Although the two are legitimate and important tasks but  they have more to do with shoring up today businesses than creating a tomorrow industry . These initiatives are no substitute for imaging and creating the future  ; they don’t ensure continued success if a company fails to regenerate its strategies ..A company that succeeds at restructuring and re engineering but fails to create the markets of the future will find itself on a treadmill keeping  one strong step ahead of the steadily declining margins and profit of yesterday’s businesses. This has been the fate of  Fidelity  bank . However, The reality on ground is beyond this now .  The painful upheavals in  this  industry   in the recent years  which reflect the failure of their onetime leaders to keep up with the accelerating pace of industry change  have continued to pose dangerous threats to   any   turnaround agenda without regenerating core strategies  ..

The  fact remains that when a company   is run by managers not leaders ,by maintenance engineer not architect   as in most banks in Nigeria including Fidelity ,it impossible or difficult to sustain industry leadership .. It is possible maintain  success without any threat to their survival  when changes are glacial or extrapolation of the past ;   However , when faced with the tides of technological, demographic, and regulatory change and order of magnitude productivity and quality gains made by non-traditional competitors and cataclysmic change in environment , success is eroded or destroyed

Only a    leadership  with mindset of an    architect  could upturn the fate of Fidelity Bank .    A leader of such   spends  less time worrying about how to position the firm in existing competitive space and more time creating fundamentally new competitive space . The one in  which the goal is to transform industry  , not just the  organization  ;where  being incrementally better is not enough    Can the present leadership of this bank live up to this expectation ?

The only avenue   open to any  small  bank like Fidelity confronting insurmountable barriers  from bigger banks with size advantage   is  to redraw industry boundaries so that what is now attractive lies outside the former barriers . This  could be done by radically shifting the basis for competitive advantage in the industry  or creating entirely new industry space ideally suited to one’s own strengths

Some analysts  believed the Fidelity  bank has another option apart from jerking up its equity to join the first tier club . According to them  this bank does not need to upgrade its  equity  to the level of the first tier players .  The only realistic and inevitable  avenue  that is opened   to Fidelity Bank to  overturn the present industry order is to  challenge “accepted practice, redraw segment boundaries, set new price-performance expectations, and reinvent the product or service concept. ;This is what Nneka Onyeali-Ikpe led management is expected to do to avoid being another run of the mill .     But  ,this  option has its own challenge and may be  very herculean with the fact that most of the rules of competition  in the banking industry and existing market have been established . The price performance tradeoffs customers are willing to make ,the channels that have proved to be most efficient ,the ways products or services can be differentiated ,among other are fairly settled  Even with this ,  this school of thought   may not be far from the truth .

Fidelity Bank leadership does  not necessarily  need to upgrade itself to a first tier bank status but to leverage its current assets and  create  better values for its investors and other stakeholders .This may not be farfetched .  Just as bigness without stretch and leverage is obesity, smallness without stretch and leverage is impotence. It remains unassailable fact that the starting resource positions are poor predictor of future  industry’s leadership. .This is because a firm can sit atop mountains of cash and commands legions of talented people  and still loose its preeminent  position  ; likewise,  a firm can   sometimes   outcome enormous resource handicaps and successively scale the height of industry leadership

Fidelity   bank, no doubt ,  has enough potentials  and could be more competitive in the hands of better management   In terms of assets  Fidelity Bank  has   big potentials  to perform better if its management could wake up . It  emerged  the biggest bank by assets  among tier 2  banks  with a total assets of N 2,758,I48 b  .  A puffy assets level could indicate improved strengths in mopping up transactions, including a better position in maturity transformation- the stuff banks are best suited for. It can also mean that the bank has applied some elastic to its wings in the form of more customer touch points, branches and Point of Sale devices. For Fidelity, it was all of these and more.

. Currently ,its   asset to equity level at  10.1 x is moderate , allowance for bad loans is sufficient at  127% ,its low risk liabilities at 68 % are made up of primarily low risk sources of funding , loan to assets ratio at 48% , loan to deposit ratio at 78% and level of bad loan at 3.8% are all indicators of its strength and brand equity.. Fidelity Bank’s Balance sheet remained well structured and  diversified .

. The  question remains, can  Nneka Onyeali-Ikpe turn Fidelity Bank round from its current treadmill position ? When  she came on board  as the CEO  in January this year ,her first initiative was   to refinance   the bank’s  7-Yr N30.0bn Tier II Bonds issued in 2015 at 16.48% p.a. with cheaper 10-Yr N41.2bn Tier II Bonds priced at 8.5% per annum .   Although the bank believed and claimed the initiative led to a 61bpts drop in average borrowing cost to 4.5% , yet the same initiative was a major spoiler that led to its loss position after other comprehensive income in the first quarter .

But for Fidelity Bank to show any signal of leadership in the industry or move out of the treadmill certain dramatic steps must be taken particularly by regenerating its core strategies . ., A major problem confronting the management of fidelity bank remains its inability to effectively control its costs .Others include the impairment debacle emanating from ineffective skills in maturity transformation in its core business ; and its trading skills that can deliver to expectations in the financial asset market .

To engender a turnaround and shed a toga of a treadmill player , ,Mrs Nneka Onyeali-Ikpe needs and must fight a three stage distinct , overlapping battles ,The first ,is the battle of foresight and intellectual leadership . This will enables her to gain deeper understanding than competitors of the trends and discontinuities that could be used to transform industry boundaries and create new competitive space .This is the competition to be prescient about the size and shape of tomorrow opportunities .By this the management could conceive fundamentally new type of customer benefits, or to conceive radically new ways of delivering existing customers benefits ..

Moreover , in between the battle for intellectual leadership and the battle for market share is typically a battle to influence the direction of industry development. In the second stage of the competition there is a race to accumulate necessary competencies ,to test and prove out alternate product and service concepts , to attract coalition partners who have critical complementary resources, to construct whatever product or service delivery infrastructure may be required , and get agreement around standards.

When the competition between alternate technological approaches ,rival product or service concepts and competing channel strategies has largely been settled the battle now shifts to a battle for market share and market position with fairly well defined parameters of value ,price, cost and service The market share is the immediate challenge before Fidelity Bank and this only way to move away from a threshold status to industry leadership status

No doubt , Mrs. Onyeali-Ikpe  has what it takes to drive and and turn around the bank . She was formerly the Executive Director, Lagos and South West Directorate of the bank and has been an integral part of management in the last 6 years.  She joined the bank in 2015 and spearheaded the transformation of the Directorate, leading it to profitability and sustained its impressive year-on-year growth across key performance metrics. 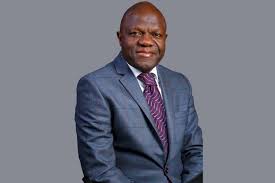